What is eDNA and can we find the Lochness Monster?

Recently, an international research team led by University of Otago’s Professor Neil Gemmell made headlines by announcing that they would be looking for signs of the Loch Ness Monster's DNA. While the work seems fanciful, the science being used is very real. Scientists, researchers, and businesses are using a new technology known as environmental DNA (eDNA) for a number of applications beyond the hunt for a mythical creature, like detecting hard-to-find species in aquatic ecosystems and determining the prevalence of said species, without having to trap or visually count the animal.

eDNA works by taking advantage of a simple fact: as living organisms move through their environment, they shed genetic material in the form of DNA. This material lingers, providing insight into the past and present of the creature that left it behind.

According to an article in Scientific American, farmers in New Jersey and New Hampshire are using eDNA to combat the Brown Marmorated Stink Bug by detecting the pests' DNA in the farm's rinse water.  Why all this fuss over a little insect? Well, they are voracious eaters that can do millions of dollars of damage to crops and early detection allows farmers to defend their livelihood more effectively. According to a study in Frontiers in Ecology and the Environment, detection using environmental DNA has proven faster than insect trapping, the traditional method.

Transitioning from crop-destroying insects to something more pleasurable, like swimming on a hot summer day... Every year millions of Americans head to lakes, rivers, and beaches to go for a swim and cool off. Few, if any of these swimmers are aware of the public health measures that are being taken to ensure that the most popular of these recreational waters are free of biological contaminants, like E. coli. 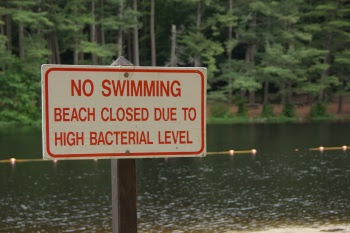 A team of researchers at Cornell University led by Ruth Richardson, an associate professor of civil and environmental engineering with Cornell, are working on a faster system for monitoring swimming waters to ensure safety. Currently, when testing water for things like fecal indicator bacteria (which can signal the presence of pathogens) using traditional methods it takes 24 to 30 hours to get test results back. Because of the long turnaround time, this can result in unnecessary beach closures. Looking forward, the test that Richardson is developing will allow a beach operator to harness eDNA onsite, allowing them to know in under 90 minutes if they can re-open. The team at Cornell have partnered with a Philadelphia based startup, Biomeme Inc., that makes a portable DNA detection platform in order to speed these processes up.

From the farm to the beach, environmental DNA detection is proving to be an extremely useful tool. As an organism moves through its environment it leaves behind a treasure trove of data waiting to be unlocked and harnessed. Now, eDNA is improving accuracy, reducing cost, and streamlining workflows across many fields and industries including paleontology, agriculture, public health, and ecology, and it’s only the beginning.