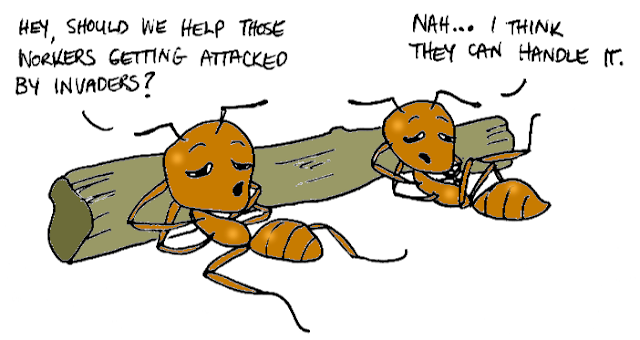 Ants have always been the epitome of industriousness and team work.  Since childhood, we have been fed with stories where ants put in the hard work and are well rewarded in the end for their effort. Time and again, ants save the day because they are hard working. Ask the lazy grasshopper, if you do not believe me. But, that's not completely true. In a recent study published in Science Magazine, researchers at the Georgia Institute of Technology, studied burrowing techniques of ants and found that 30% of the ants actually do the work. This might just be the reason, you have been looking for, to justify your lazy attitude but before you harp on it, do read this post to know why ants do so.

Like humans, ants, too, are social insects and do their work collectively.  Division of work is common phenomenon in the ant society and so is movement of individual units to and fro from home to place of work. Problems of the social structure should affect ants in equal measure as they affect humans. However, ant societies seem resistant to such problems and, therefore, researchers study ant behaviour to address problems affecting human societies. One such problem is the traffic jams. In spite of all the infrastructure growth, major cities around the world have been plagued with traffic issues, that do not show any signs of receding.But, ant societies, manage to stave off such issues with their ingenuity.

The study published in Science that I described earlier, attributes the ability of the colonies to avoid issues like traffic jams, down to the fact that only 30% of the workers actually doing the work. Contrary to the title of the post, this does not happen because the ants are lazy and want to avoid work. Rather, this is part of the strategy that ants deploy to avoid crowding of workers at the work site and the subsequent reduction in productivity. The activity of burrowing is quite like an excavator making its way through a mountain. There is only so much space for the excavators to move and increasing the number of excavators is only going to crowd the site and increase problems, instead of getting any work done.

The same logic can be applied to transportation issues in a city as well. Any given route has a maximum carriage capacity and traffic woes arise because, we force extra carriage through it, especially during peak hours. What we really need to do is to streamline our efforts into ensuring that more people can be accommodated in lesser vehicles during peak times. What we do instead is bring out our own private vehicles on the road, to reduce commuting times and end up further complicating that issue. This simple solution to this, is to get a little lazy and let the 30% do the work to ensure that the system works efficiently.


This would mean local transportation authorities identifying carrying capacities of its infrastructure, planning public transport in a way to ensure that it is adequately utilized and avoiding traffic clogs to allow people to move freely, even during peak hours. Well, if this laziness could help you beat your traffic blues, everyday, wouldn't you rather be lazy?

In case, you are still hung on to the title of the post and are looking for laziness in ants, there is some good news for you after all. A study conducted at the University of Arizona showed that a significant number of ants in a colony are indeed lazy and are not working in the nest. There are many theories that have been put out by the researchers to explain why ants do so.

Foraging work done by ants is quite variable in nature. On a regular day, you might get access to a little food and on a lucky day, there might be excess food that can be foraged. The colony cannot scale up instantly to make forage food that very day and, therefore, must build up its population to ensure that there are enough hands, if needed on an eventful day. This practice, is quite common in Information Technology (IT) companies that usually have 'bench' of staff that can be assigned to new projects immediately, rather than initiating the process of hiring.

This theory tries to explain the laziness of some ants, by citing that each ant has a different threshold when it comes to work, just like humans do. Different people have different thresholds, when it comes to preparing for an exam. For some, it is a month, for some a fortnight, while some only begin the night before. The lazy ants are probably, the third kinds that work only when the pressure of work is extremely high.

Laziness may also creep into a colony, once it has grown to a significant size. Just like employees in a massive multi national organization function, where exists a clear chain of command, and people move and respond slowly to instructions, as they filter up or down, through 'established' channels, probably the ants that are seen lazing around in colonies, are just yet to get their instruction from their higher ups.

In case, you would like to know more about this study, there is a well written post from Sketchy Science (it has cartoons too)