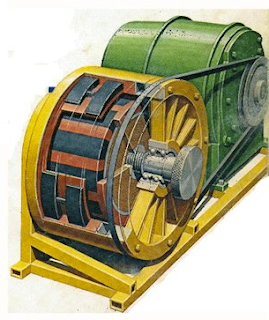 The internet is rife with websites that promote generators that are capable of providing electricity without using any fuel. Built largely with magnets, these 'free energy generators' promise to cut your electricity bills and provide a much greener alternative to the electricity that is largely generated out of fossil fuels. Elaborate videos that give you estimates of how much money you can save without revealing any details of how to go about it, manage to keep the audience hooked on for a while, but $40 price tag, the loads of freebies and the instant $10 discount for not leaving the page, make the product and its seller highly suspicious. So, we decided to find out if these free energy magnetic motors really work?

The magnetic motor works on the simple principle that we all already know, 'Like poles repel each other while opposite poles attract each other'. By arranging the magnets in a fashion where only like poles face each other, one can simply set the motor into motion like in the video below. (You can skip to the important part by jumping to the 4th minute of the video)

Once the motor is set into motion, one can treat it like a turbine and extract electrical energy out of it. That's how simple this is!

The device can be made to work a little better if a electromagnet replaces the opposing magnet in this setup. This is because, one can quickly switch the poles of an electromagnet. Although, this will require some amount of electricity to make the electromagnet work, the output of the magnetic motor will be much higher than the power used to operate the electromagnet.

Efficiency of the device can be further increased by changing the design of the motor and positioning magnets in a way where the motor can run easily. In the amateur video below, this guy from Pakistan has made his own version of magnetic motor and you can see how it works!

But there is one major flaw in this whole setup. The electrical energy that can be generated out of such a system seems to be created out of no fuel at all and that is stumbling everybody. So far, all we know is that to generate electricity, we need some sort of a source, rays of the sun, kinetic energy from flowing water, or at least some fuel to be burnt so that the turbines can move and generate electricity. But the magnetic motor challenges this notion and tells us that all you need is an arrangement of magnets (like in the first video above) to put the motor in motion and generate electricity. And for many people, this seems to be breaking 'the law of conservation of energy' making this concept very difficult to accept!

But in reality, it is the magnetic energy that is being used to put the motor into motion and over a period of time, the magnets will lose their magnetism and the motor will stop. But again, all one needs to do is replace the magnets and the motor will be workable once again. There is some work that has been put into the type of magnets that can be used for such motors and Neodymium magnets have been claimed to offer the best results.

If you do a simple search for magnetic motors, you will find a lot of websites promising free electricity for the rest of your life and all that for $40 or less, one time investment (with free home delivery too). It is difficult not to get suspicious about the tall claims made by such sellers and one would have to be extremely gullible to fall for a scheme like that. Even if you have fallen prey to scheme like this before, you might find solace in being not the only one. This guy named Mike Brady was arrested for pilfering a sum close to 1 million Euros that came from 61 Germans who believed that he could deliver them a magnetic motor that would generate electricity. There is some evidence to say that Brady's motor did work but there have been quite a few other companies who have been tried to perfect this motor for a while and rid us of our energy woes. Unfortunately, these companies have closed down or gone into hiding for reasons that are varied but also because they have not been able to deliver on their promise of a free energy generator that can scale a town or a city.

Even though scammers promise free electricity, the fact remains that there will be a set up and maintenance cost and somewhere even the cost of replacing the magnets, which is not going to be cheap. Still, if we can get a motor that can generate energy which reduces on dependence on fossil fuels and does not harm the environment as much, then why shouldn't we go for it? Yes, it needs to be perfected and explored more scientifically but that's the case with all discoveries.

If you have found this post interesting, you might want to visit the Free Energy Quest to know about other such inventions! Also, there are interesting videos and books from Emedia, who publish information about advanced energy sciences which you can find here! And for those interested, here is a book on Amazon about the Free Energy World which worth a look.